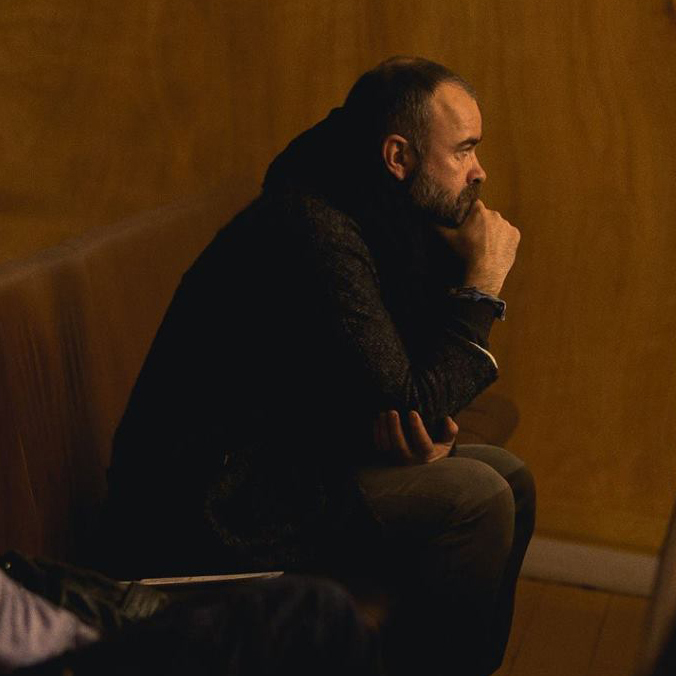 “The evocative potential of the pieces proposed for the church’s exterior, together with their theoretical framework, make this minimal action a perfect match for an architecture that has no need for grand displays.”

Ángel Calvo Ulloa, member of the jury of the First Annual Connexio Awards.

Álvaro Negro was awarded one of the six Connexio Awards for the project Cumio, proposed for the church of San Miguel de Bacurín. The artist proposed a series of sculptures to be hung on the three outer walls of the sacristy, made of black granite, the same material as several of the tombstones in the churchyard. His abstract proposal has been carefully tailored to respectfully integrate into its surroundings.

“In Cumio the visual theme is the triangle, a geometric shape that defines the surface of the six stones, and then continues in the angle of its edges, which are cut inward at 45°, creating a truncated pyramid pointing in towards the wall. I think of it as mural sculpture; despite hanging on the wall, its entire volume clearly aspires to three-dimensionality.”

It was after actually visiting the sites proposed for this first year’s Connexio Awards that I decided to apply. I was taken not only by the dramatic scenery, but also the rich heritage sites along this stage of the Camino Primitivo, where one still gets a sense of a European history carved out through cultural exchanges along its most heavily transited routes. Álvaro Negro

Álvaro Negro (Lalín, 1973) has always analyzed the pictorial without losing sight of historical issues that, whether by similarity or contrast, remain relevant for its status today. We find references to the light of Renaissance paintings or the shadows of the Baroque, an awareness of color with all its historical connotations, and a formal display that extends beyond the bounds of the canvas and into photography and video, as well as a constant examination of the modulation of space and architecture. His images are rooted in issues of time and space and, though abstract, are firmly tied to experiences of the everyday – evidence of a complex way of seeing and of being (in the world). The artist sees himself as the first spectator in a process of perception that he displays as-is, whether via the sun’s movement in a chiaroscuro, or the flow of the paint itself as the axis of the space separating the viewer from the painting.

He has received awards such as the Campocerrado Estampa (2019), the Julián Trincado (2014), and the Purificación García Biennial Photography Award (2nd prize, 2010). He also received an overseas artists’ grant from Unión Fenosa (2007), as well as a grant from the Fundación Pedro Barrié to pursue graduate studies abroad (2002).

Lastly, he was the recipient (2017-2018) of a residency grant at the Real Academia de España in Rome, where he carried out the project La presencia pictórica como motivo. This project developed into work he showed at last year’s ARCO Madrid and Lisbon, as well as his solo project at the Estampa art fair (Madrid), the solo show Dea Roma at F2 Galería (Madrid), and the group show Abundó en Felices Curiosidades at Espacio Valverde (Madrid). He has returned to this project from Rome in his current show at CAB (Burgos), which adds to the retrospective vision of his 2017-18 show “Y” at CGAC (Santiago de Compostela), which contextualized his career, starting with his beginnings in the mid-90s. The publication by the same name that accompanied the show is perhaps the best guide to Álvaro Negro’s body of work.